Would you like to help us and commit to our cause?

Organize or take part in an action for CANSEARCH (CANDO)! 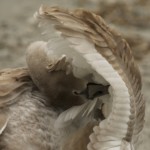 From 11 – 21 April, Mme Michèle Nussbaumer will exhibit, at Création Demeter, 84 Grand-Rue, 1180 Rolle, her photos on the theme “Fais-moi cygne”. Proceeds from the sale will be donated to the CANSEARCH Foundation. The opening will be held on Thursday 11 April from 17h to 21h. 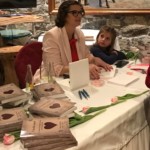 Florence Florenza, a mother of six children who has overcome cancer herself, dedicated her book on her illness, during an aperitif at the Montbrillant hotel on January 23, 2019. 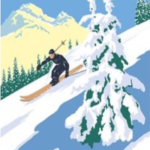 CANAFTERSKI took place on 28 December in Verbier:   it was a great opportunity for friends of the CANSEARCH Foundation to get together for an aperitif-dinner and raise money for children with cancer. 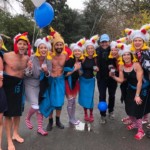 The “Poules Mouillées” led by Valérie Loup, participated in the annual Christmas swim in lake Geneva on December 16 in favour of CANSEARCH! 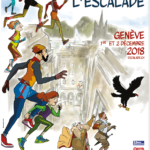 The CANSEARCH MOMS, reunited by Sophie Georjon, ran the Escalade Run in the colours of the foundation on December 1st. 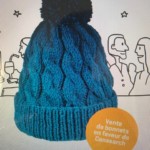 End of November, a friend of the Foundation organized a sale of wool hats that she designed and knitted in favour of the CANSEARCH Foundation 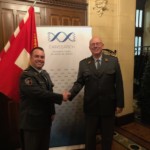 At its last General Assembly on November 11, 2018, the Military Society of the Canton of Geneva announced its active support for CANSEARCH. The SMG Committee encouraged all of its members, about 700 officers, to support our cause and make donations for medical research on childhood cancer. 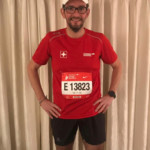 On 7 October, Philippe Sala, a friend of the Foundation, ran the Chicago Marathon raising funds for CANSEARCH.  Congratulations on this successful double challenge! 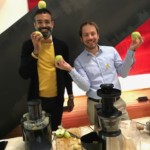 On September 28, during “Golden Month” dedicated to childhood cancer, Barclays Bank of Geneva organized a CANDO for CANSEARCH. On the program was the sale of apple juice and yellow goodies by employees of the bank and delivery of an artistic work to the children treated at the onco-hematology paediatric unit in order to show their solidarity with them. 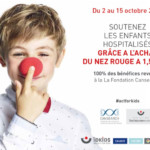 From 2 to 15 October 2018, all the Okaïdi-Obaibi-Jacadi stores in Switzerland are doing us the honour of selling red noses to their customers in favour of the CANSEARCH Foundation. 100% of the profits will be donated for medical research on paediatric cancer while making customers more aware of the Foundation and its purpose. 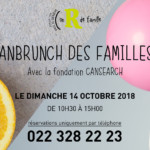 Geneva’s Pro Juventute restaurant “Un R de Famille”  is organizing a CANBRUNCH for families in aid of CANSEARCH on Sunday, October 14, 2018 between 10:30 and 15:00. There will be a wonderful buffet of fresh and seasonal products and it is an opportunity to spend a good time with your loved ones and enjoy yourself in a beautiful setting. There is an area dedicated to children who can play, colour or tinker under the watchful eye of a nanny. 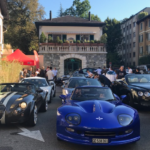 On Saturday, September 15, the CIC Bank organised  a sports car rally for the children of the onco-pediatric hematology unit and the CANSEARCH Foundation.

Fabien Terranova and his friends took part in the night half marathon run to raise funds for CANSEARCH. 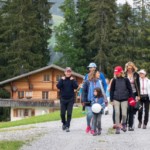 On 25 August the 4th edition of the CANWALK organized by Brigitte Crompton took place in Gstaad. More than 130 people were present. A special thank you to Jodlerklub Bärgfriede for the animation and to all the organizers (Bärgsunne for the beautiful salads, Bernhard Berchten for its superb farm, Wehren for the rolls and Ruci Swiss Ice Cream for the delicious ice cream). 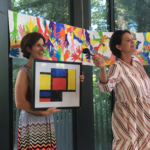 Several children’s drawings were sold during an auction organized by the Montessori School of Geneva for the benefit of the CANSEARCH Foundation in July. 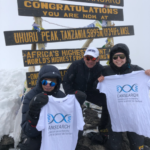 In July Mark Matthysen-Gerst and his children, Alice and Victor, climbed Mount Kilimanjaro while raising awareness and funds for CANSEARCH 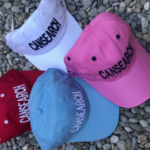 Valentine Crompton organised a sale of CANSEARCH caps for the benefit of the Foundation. 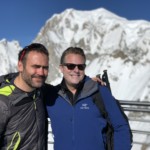 A severe deterioration of weather conditions forced Vincent Subilia and Marc-Antoine Glauser to postpone their ascent of Mont Blanc in aid of CANSEARCH. According to Vincent: “we must know when to give up serenely in order for us to be properly prepared to launch our assault of the Roof of Europe as soon as the weather (and our agendas) will allow us”. 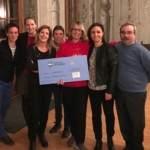 A Walk in Dardagny on June 3, 2018 in favour of CANSEARCH set up by Alix Rivoire in collaboration with the Commune of Dardagny gathered many participants in a magnificent Geneva countryside setting. 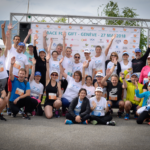 Numerous participants ran or walked for CANSEARCH during the RACE FOR GIFT solidarity race on May 27, 2018, individually, with their family or with work colleagues 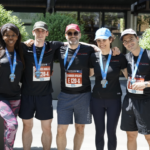 The law firm Chabrier, led by Bayla Hassberger, motivated his collaborators and friends to run the Geneva Half Marathon as a team for the benefit of CANSEARCH on May 6, 2018.

Jérémie Flicker, a teenage friend of the Foundation, toured Lake Zurich (70km) raising funds for the CANSEARCH Foundation on April 21, 2018. He did it also as part of a school project.

CAN PLAY IN THE DARK 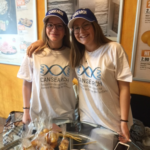 Marie-Caroline Viscolo and Elsa Wohlgemuth, two teenagers from Crans-Montana, organized a maze in the dark for young children and a bake sale to CANSEARCH in March 2018.

Smile and shoot with the photographer Marianne Meyer, 28 and 29 April in Founex, 26 and 27 mai in Bossey. Have original and personalized portraits of your family or friends in four exclusive shooting sessions. http://www.smile-and-shoot.com

An evening organised by the Geneva-Rhone Lions club at the Four Seasons Hotel de Bergues on Thursday 26 April in favour of CANSEARCH.

CAN PLAY for KIDS

Come and join us for a Magical Morning at Bubbles Kids Club Alpes (Rue Sigismond-Thalberg 6, 1201 Geneva) on Friday March 30, 2018 between 9:30 am and 12:30 pm Workshops, sports and creative activities organized for children in favour of the CANSEARCH Foundation.  Let Bubbles take care of your children by registering them at this charity event: contact@bubblessportsclub.com – 022 900 03 03

To all of you A HUGE THANK YOU for your commitment and generosity to the CANSEARCH Foundation.  Your continued support is essential to the sustainability of the Foundation.

From 2 October to 10 December 2017, the 1st edition of CŒUR CACAO, a solidarity online sale of chocolates will be held for the benefit of 8 Swiss and French charity organizations. The operation raises awareness on all of these causes and the financing of their actions through the purchase of chocolates in an approach that is both supportive and ethical.

This year the choir celebrates its 20th anniversary and presents, a “Best of” that will make you live or relive the best moments of its previous shows. The profits of the evening of November 18th will be donated to the CANSEARCH Foundation

La Marche du Coeur took place in Carouge on 15 October.  All the profits from the day were in favour of the CANSEARCH Foundation.

A huge thank you to everyone for your participation and continued support. 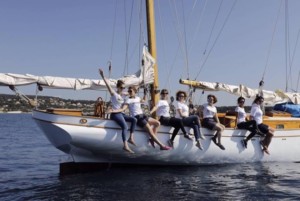 Les Dénébolettes: a story of a passionate group of women, sharing the same attitude to ​​life, the same values ​​and united on a Bounty sailboat of 19.50 meters …. For the Ladies Cup at Saint Tropez our Denebolettes were hoping to raise money and awareness for CANSEARCH.  While not getting to sail due to weather conditions they nevertheless raised just over CHF 1’500.- Congratulations and thank you for supporting CANSEARCH 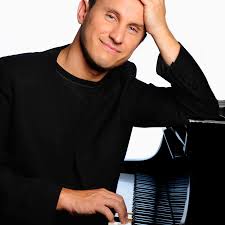 A piano recital by Nelson Goerner was given in the Church of Saanen (Gstaad) on Saturday 11 March in support of the CANSEARCH Foundation. 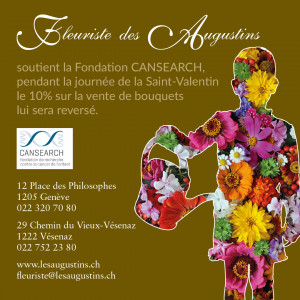 A faithful and valuable partner of the CANSEARCH Foundation, Le Fleuriste des Augustins reiterated its support for Valentine’s Day. On February 14, for every bouquet bought this day, 10% went to CANSEARCH! Like and support!

The Children’s Pajama Brand, My Little Shop, supports the CANSEARCH Foundation! In December, for each pajamas purchased, £ 1 was donated to the Foundation. That’s how £ 500 was raised for CANSEARCH.  http://www.mylittleshop.com 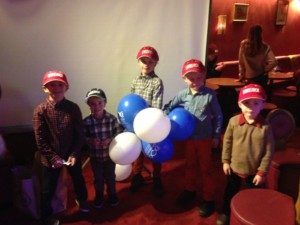 A second edition of CANAFTERSKI was held in Verbier on 29 December. Snacks for young and old was organized by friends of the Foundation in favor of CANSEARCH. This year a raffle was organized and proved very successful. Many of you participated in this great event and thanks to your presence and your generosity, over 13’400.- was raised for CANSEARCH. 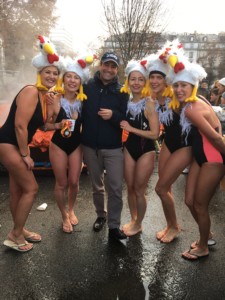 The Christmas Cup was held on Sunday 18 December. Six friends threw themselves into the water for CANSEARCH. The icy water of the lake did not prevent our Wet Hens from honoring the challenge they had embarked on: participating in the traditional and iconic Christmas Cup to support research. Thanks to your generous contributions, they were able to donate 100% of their sponsorship, CHF 7’400. to the CANSEARCH Foundation to finance its research. Bravo girls and thank you to all for this very generous donation to CANSEARCH.

Saturday, December 17th, The Team of the Little Guerrier (in memory of Marouane) held a stand at the Holiday Market at La Maison du Quartier in La Jonction. A choice of jams, cakes and various objects were offered. An opportunity to buy otherwise and to meet.

The third edition of the CANWALK of the Bernese Oberland took place near Gstaad on 13 August. More than 120 adult and child walkers gathered for a walk, followed by a lunch at the sound of the Alpine horns. Thanks to the strong participation and generosity of donations and sponsors, CHF 15’000.- has been donated directly to CANSEARCH to support its research projects against childhood cancer. 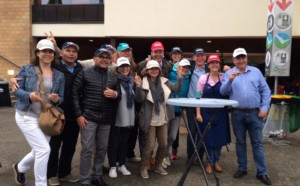 On the occasion of the Music Festival, the Commune of Corsier chose to support the CANSEARCH Foundation by donating all the profits of a huge paella offered by Diane and Eric Anselmetti.

CANWALK- CAROUGE
The traditional “Marche du Coeur” was held in Carouge on Sunday, June 5.  Over one hundred walkers gathered in the square to walk in favor of the CANSEARCH Foundation.

CANRUN or CANWALK (May 2016)
The 3rd edition of Race for Gift took place on 29 May under the rain! Again forty participants were present to support the CANSEARCH Foundation. This year CANSEARCH received the award of “the most important fundraising Winner – Class Association ” raising over 20,000 chf !

September
CANHIKE
The second edition of Hike for Life was held in September. Again, under the initiative of Novartis, oncologists from different hospitals, accompanied by mountain guides, climbed the Pigne de la Lé in Valais (3’396m). Each hiker had committed to raise funds and CHF 1’650.- was raised for the Foundation. Congratulations and thank you to our hiker doctors.

May
CANRUN or CANWALK
The 2015 edition of Race for Gift was held on Sunday, 31 May in magnificent weather with more than 40 participants supporting the Foundation. It was a great day in a cheerful and friendly atmosphere, full of emotion showing the true spirit of solidarity!

Thanks to all our donors, funds collected through our participants reached over CHF 19’513.- .

December
CANAFTERSKI
On 29 December, over 130 people took part in an “after ski” event held in Verbier / VS for CANSEARCH. Young and old came to support the Foundation in a warm and relaxed atmosphere: workshops and snacks for the younger ones and aperitif for the older ones! It was a great opportunity for the Foundation to gain popularity in Valais.

More CHF 7,500 was raised for the Foundation.

CANTRAIL
To support the CANSEARCH Foundation, four participants decided to look for sponsorship for the 2014 SaintéLyon held on 6 December.

The SaintéLyon is “running night raid ” of 72km between the towns of Saint -Etienne and Lyon via the peaks of the Monts du Lyonnais. This is a very popular race which can be done individually or in relay teams of 2, 3 or 4 people.

After 10 hours and 40 minutes of effort, the first of our participants crossed the finish line! His first thoughts were for all children with cancer who are fighting against the disease.

Congratulations for this incredible sporting and human achievement and thank you for supporting the CANSEARCH Foundation. CHF 3’700.– have been donated to the Foundation.

CANCLIMB
Project MAE Mansour Shakarchi
In memory of his friend Marc-Antoine who died of cancer at the age of 18, Mansour (age 17) decided to climb and open a new route in the Swiss Alps.  He did so and the two routes he took have been named MAE and CANSEARCH.

What a great tribute and what magnificent generosity.
gigaf.org/URXAoh
www.givengain.com/activist/123156/